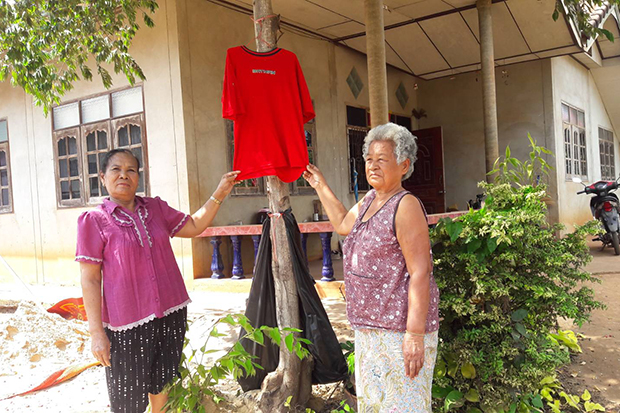 Residents in Nong Bunmak district of Nakhon Ratchasima province on Sunday show a red shirt hung in front of a house to protect them from a ghost. (Photo by Prasit Tangprasert)

NAKHON RATCHASIMA: The public health office of this northeastern province has launched a campaign to calm public disquiet after six people in several tambons in Nong Bunmak district died during the past two months.

A rumour spread that the ghost of a widow had taken the lives of the six people. This prompted villagers to hang a red shirt in front of their houses, believing that this could protect their family members from the ghost.

Dr Narinrat Pitchayakamin, chief of the Nakhon Ratchasima Public Health Office, dispatched teams of medical staff to tambon Nong Mai Phai and other nearby tambons in Nong Bunmak district to investigate and establish the actual causes of the deaths.

The investigation revealed that of the six deaths, two died of stroke, two of cancer, one of  complications from kidney disease and one died in their sleep.

Dr Narinrat said since the causes of the deaths could be scientifically established, there was no reason for people to panic.

Medical teams have been instructed to educate the people to take better care of their health by exercising regularly, refraining from smoking and alcohol use, and avoiding sugary, salty and fatty food to prevent disease.

In case of emergency, people are advised to call 1669 so that a patient can be taken to hospital for timely treatment, he added.